While commuting to work on the bus I decided I needed something better than a Adafruit shipping box as a work area. Since I'm on the bus and frequently have to share the with someone else I'm limited to a work area the size of my lap with limited storage at my feet. I decided to give two small parts organizers a try. One with some of the dividers removed would be used as my work area and the other would be used for parts. I had picked up one recently for a reasonable price at Walmart for my RC's but didn't like how the center of it wasn't removable but the outside was. I figured with a little modification I could make it work though. So I headed down to Walmart and found that they had changed the design for the better as far as I was concerned. The new design has all of the removable dividers on one side and fixed dividers on the other.

The problem is that winter is coming and it will be dark on the bus soon. So I've come up with two different light bar ideas. One is an array of 6 white LED and the other is an array of 4 WS2812 RGB LEDs. Here are the instructions for the 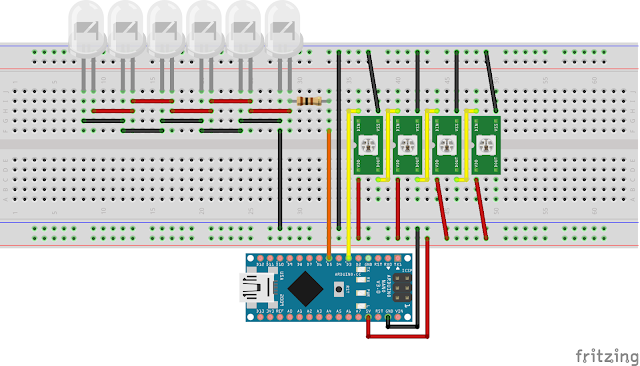 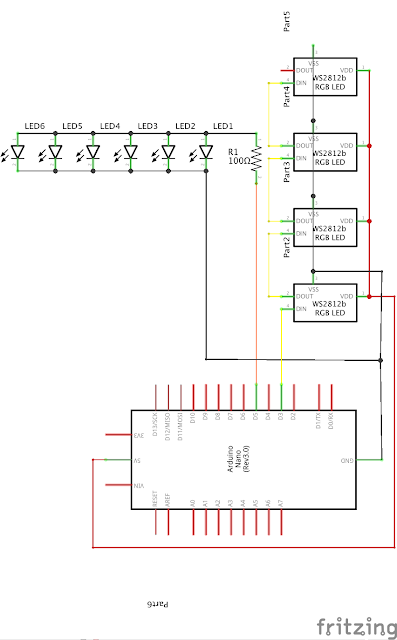 Popular posts from this blog

August 06, 2019
Objectives: Build a circuit and program that responds to the environment. Parts Wemos D1 https://amzn.to/2yYBbMY Photo Resistor 10K Resistor Directions Clone https://githubcom/awoehler/electronics.network Open Examples/NightLight/NightLight.ino Connect the 3.3+V to the photo resistor. Connect the photo resistor to a 10k Ohm and connect it to GND. Connect the line between the photo resistor and the 10k resistor to the A0 on the Wemos board. Compile and upload the sketch to the board.  Exercises Adjust the threshold values to work better for your environment. Change it so that as it gets darker the light get's brighter. Add a brighter light.
Read more

August 06, 2019
Blink is a simple program to get you started with our ESP8266 and the Arduino IDE. Objectives: Learn how to interact with the built in LED. Learn how to use the serial monitor. Parts Wemos D1  https://amzn.to/2yYBbMY Directions Clone https://githubcom/awoehler/electronics.network  Open Examples/Blink/Blink.ino Compile and upload the sketch to the board. Open then Serial Monitor and make sure that the board rate is set to 115200. Press the reset button on the Wemos and you should see Begin followed by off, on, off, on, ..... in the serial monitor. Exercises: Add comments explaining what each line of code does.  Change the blink pattern to transmit an SOS signal in morse code.
Read more